HOW I LEARNED TO STOP WORRING 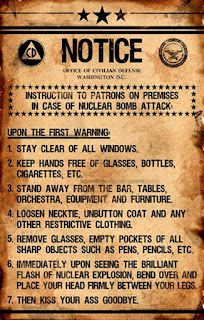 HOW I LEARNED TO STOP WORRING
AND LOVE THE BOMB!
http://www.youtube.com/watch?v=jLo0aOfDrLY
1950/60’s CITY OF CALGARY ALBERTA AIR RAID DRILL
In 1962 we were sent home with a note for our Mothers to sign, eat our lunch and then run back fast as we could to school so have our teacher could countersign our note with our, arrival back time at school for the Canadian Civil Defence. Well, I always rode

my bike (winter or not), so they made my friend Glen walks with me, so in case I a blown inner tube or my chain fell off I would be equal like all the other kids.

“Please click on the forward arrow to start the below video”
http://www.cbc.ca/archives/categories/war-conflict/cold-war/cold-war-culture-the-nuclear-fear-of-the-1950s-and-1960s/calgary-evacuates-operation-lifesaver.html

During the Cuban Missile Crises, I used to have strange dreams about a Nuclear War as I could not see why we were so concerned about Cuba?? Small, far away from Canada and I did not even know anyone from there? So if it meant (as in my dreams). climbing up our basement steel support beams cause our home was gone, as I ran from Radio Active Wolves that I dreamt about, then let them have it!!! The Russians that is, as they could have the place, I didn’t even like Bananas then anyhow? So when my Dad returned from one of his 2 jobs I asked him what would happen if, I did not make it home in time to be with our family?

So to explain he took a slow drag off of his cigarette and flicked an extra ash onto the one that was already on the ground. Then said; “see those 2 ashes, well (as he used his shoe to join them together), the Atomic bomb will turn us all into ash so fast we will not feel a thing and all of us will then be one ash everywhere so you need not worry cause we will be together and those Wolves will be ash as well, hurting no one.” My Dad never lied so I knew it was the truth and I felt a bit better.


So when the big air raid day came I told my friend Glen what my Dad said and we walked very slow and even went to Dairy Queen as I had $.25, which was enough for 2 shakes! Mine was strawberry and I was the last one into school. My grade 2 teacher went ape, and for being the last one in and not taking my Grade 2 duties serious, I got a both hands strap in front of the class!

When I was in the Royal Canadian Air Force, during basic training, we learned all about, Nuclear, Biological, Chemical Warfare and we had a sign as you can see posted here that was posted all over the base, which made me just as happy as that Strawberry Shake did a decade earlier! P.S. I also Love this film as it informs you how to survive a Nuclear, Biological, Chemical Warfare, now put this thought through you heads, it is summer, and you have to relieve yourself, also try opening and eating a can of peaches for shit’s and giggles, now there is a an hour of toasty fun, while at the same time someone with an AK -47 is coming to join you for lunch but with very bad table manors? LOL
http://www.youtube.com/watch?v=9xywdF-gQ8U
So now for a song, Let us Sing!! :)
http://www.youtube.com/watch?v=wxrWz9XVvls

Wriiten By,
Sir Richard...
Sent to you all with LOVE and all that heaven will allow!
For those who believe in resurrection, death is inconsequential. It's not an ending but rather a new beginning. A second chance, a reunion. The very idea of resurrection is so seductive a concept it's easy to forget, before you can rise from the dead you have to spend a few days in hell.