SO I THINK I WENT INSANE TODAY?

Posted by Sir Richard The Bayo-Hunter at 12:12 PM No comments:

Labels: Heart-Crazy On You, LeAnn Rimes - Crazy and The Vanilla Fudge - You Keep Me Hangin On

WHO IS JOHNNY CANUCK? 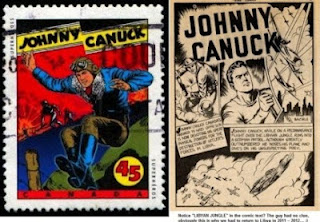 FOR CANADA DAY THIS SUNDAY JULY 1ST 2012 -
WHO IS JOHNNY CANUCK?
http://www.youtube.com/watch?v=8SS_9rqHLjg
I AM CANADIAN – DUDE
http://www.youtube.com/watch?v=LEkl_Mnhp1A
I AM CANADIAN – MOON WALK
http://www.youtube.com/watch?v=7s78-FsDqqM
JOHNNY CANUCK THEATRE
One of the most common question that I get asked when I travel or talk to someone in the USA is;"By the way what's a Canuck?" when referring to the Vancouver Canuck Hockey Team or when referring to all of us up here in the Great White Snowy North?
The simple answer is "A CANADIAN" but the complete answer takes a little more explanation. ;)
During the War of US Independence (1775-1782) while on a US invasion of Quebec, a French Canadian while listening to an American Military Speaker speaking about the virtues of the United States.
Commented that the speech was “quel ennui” or “How Boring” translated into English. This was immediately mis-translated by our American Cousins, that what the French Canadiens were saying that they were from “Cal Canu”.
So the French “quel ennui” translated into English as “how boring” was then mis-translated from French into English via this séquencé; “quel ennui” = “Cal Canu” = “Canuck” = “Eventually becoming Johnny Canuck” the slang term once used by Américains for French Canadiens.
The term Canuck was actually first recorded in print about 1835 as an Americanism, originally again referring specifically to a French Canadian. This was probably the original meaning, though in Canada and other countries now days, Canuck more often refers to; Any Canadian!
In the 1860's, editorial cartoonists north and south of the great medicine line, created from this slang term a character by the name of "Johnny Canuck". Again Johnny Canuck was used to represent Canada, just as Uncle Sam who was used to represent the United States and or John Bull who was used to represent Great Britain.
Johnny Canuck was depicted as a wholesome young man, wearing the garb of a French Canadian Habitant/Farmer, Logger, Rancher or Soldier. Johnny Canuck was often drawn resisting the incessant bullying of Uncle Sam or John Bull.
During World War II, a new comic book hero was introduced in Canada. His name was also Johnny Canuck. This time though, Johnny Canuck was a caped strong man who protected Canadians from the Nazi menace. Johnny Canuck had no special powers, but he waged a one man war against Hitler with human strengths belonging to any fine fighting Canuck. Even today, tell someone from Holland that you are a Canuck and they will thank you for liberating their country from the Nazis!
However, in 1975, a new comic book character, Captain Canuck, emerged. Created by Richard Comely (who was apparently unaware of the earlier Johnny Canuck character) Captain Canuck was a superhero rather than just a hero, he wore red tights, and bore a red maple leaf emblazoned on his forehead and fought against the “RED MENACE”.
In 1995, Canada Post issued a series of Canadian postage stamps celebrating Canada’s comic-book superheroes. Johnny Canuck is depicted as he appeared in the comic books circa 1942, dressed in flight jacket, goggles, leather headgear and boots. Johnny Canuck is linked to a tradition of stalwart, honest, upstanding Canadian heroes.
In January 2006, "Johnny Canuck and the Last Burlesque," a musical comedy, premiered at the Mainline Theatre in Montreal. The play, created by Jeremy Hechtman and Patrick Goddard, concerned the post-World War II life of Johnny Canuck and his adventures as a burlesque star? The play starred Aaron Turner as the sexually naive Johnny Canuck.
Then Johnny Canuck was adopted, unofficially, by the Vancouver Canucks Hockey Team as a second team mascot and also as an alternate Team Logo. The Vancouver Canucks originally adopted the logo when they were a pro league team in the Pacific Coast Hockey League In the mid-20th century.  In 1970, they discontinued the Johnny Canuck logo in favour of the "Stick-in-Rink" logo.  So this is the long and the short of the meaning “CANUCK” and now you know.
Well, as any polite Canadian would say; “Thanks for Reading this, eh!”  So on behalf of myself and also the rest of us Canucks, up here in Canada...
We ask that you remember that we are all in this World together so in life, try to always keep your stick on the ice and “HAPPY CANADA DAY!”
http://www.youtube.com/watch?v=cKvVX9HbC_I  (CANADA DAY IS JULY 1ST)
By Sir Richard, your Fellow or Cousin, Canuck… http://bayo-hunter.blogspot.ca/
Posted by Sir Richard The Bayo-Hunter at 7:21 AM No comments: