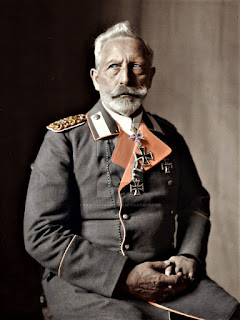 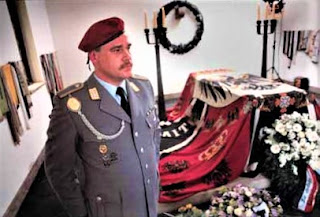 Foch receives the German delegates at 9:00 am on November 8 in a train parked in a railway siding in the forest.
He asks if they are ready for an armistice. An aide reads out a list of terms fixed by the Allies at Versailles four days earlier.
At the request of the delegation, a messenger is sent to German forces commander Marshal Paul von Hindenburg in Belgium for his authorization to sign an armistice.
By the time the envoy arrives, on November 9th, the Kaiser has abdicated, with the German Revolution under way.

The Guardian today, on Tuesday the Reichstag had debated the future of the Kaiser. At the time, the political parties were split on the issue. The Kaiser, now with the German High Command in Spa in Belgium, has also been adamant that he will not abdicate.
However Ludendorff’s replacement General Groener has now taken stock of the Army’s position. He reported to the German Chancellor that in order ‘to avoid a total military catastrophe, an armistice was required by November 9th today and that even November 11th could be too late‘.

The Kaiser, still refusing to abdicate, is told by Groener: ‘The Army will march home in peace and order under its leaders and commanding generals, but not under the command of Your Majesty for it no longer stands behind Your Majesty.
Kaiser will board his private train and travel to exile in The Netherlands. This will bring to an end over 500 years of Hohenzollern rule in Prussia and Germany. However, the Kaiser in exile will continue to draw a considerable income from his German holdings until his death in 1941. Wilhelm II will successfully resist attempts to be extradited to face war charges of ‘a supreme offence against international morality and the sanctity of treaties which will later delight in the early war victories of Hitler.

1918: The last Emperor
With Germany on the brink of defeat in World War I and a revolutionary mood sweeping the country, the unpopular emperor Kaiser Wilhelm II was forced to abdicate, ending Germany's monarchy.
On November 9, 1918 the Social Democrats' deputy chairman Philipp Scheidemann rushed to the balcony of Berlin's Reichstag parliament to announce the birth of what would become the Weimar Republic.
"Long live the German republic!" he shouted.
Two days later, Germany agreed to sign an armistice that ended the Great War against the Allied forces.
The terms of Germany's surrender were deemed so humiliating that historians believe they helped sow the seeds for World War II.

1923: Hitler's 'beer hall' putsch
Adolf Hitler, the then relatively unknown Nazi Party leader, and his cronies tried to seize power with a coup that started in a crowded Munich beer hall on November 9, 1923.
After climbing onto a chair and firing into the ceiling, Hitler proclaimed the end of "the government of the November criminals", a term used by critics of the 1918 surrender.
But police and soldiers quickly crushed the attempted putsch, and Hitler was arrested.
He used his trial to gain notoriety and spread anti-Jewish hatred, and ultimately spent barely nine months in prison.
It was in his cell that Hitler began writing "Mein Kampf".

1938: Night of Broken Glass
Nazi thugs torched synagogues, smashed Jewish-owned shops and rounded up Jewish men across Germany on November 9, 1938, in what became known as "Kristallnacht" or the "Night of Broken Glass".
The timing was no coincidence -- that evening senior Nazi figures like Joseph Goebbels had riled up crowds at events honouring Hitler's 1923 coup bid.
At least 90 Jews were killed and 30,000 deported to concentration camps in the outbreak of violence, which historians say ushered in the start of the Nazis' drive to wipe out Jews.
Today, Germans remember the Kristallnacht pogrom by polishing or placing flowers on "Stolpersteine", small brass plaques on cobblestones commemorating Nazi victims.
In Berlin last year, 16 plaques were dug up and stolen just before the anniversary, fuelling alarm about a resurgence in anti-Semitism.

1989: Berlin Wall comes down
The fall of the Berlin Wall in a bloodless revolution on November 9, 1989 is a joyous milestone in German history, ending 28 years of Cold War separation.
But because of the dark chapters associated with the date in the past, it was considered an ill choice for a public holiday. Germans instead celebrate October 3, 1990, the official reunification of East and West Germany.
The wall came down almost by accident, after communist East German bureaucrat Guenter Schabowski was caught off guard during a live press conference on the question of when exactly new, more relaxed travel rights would take effect.
"As far as I know, as of now," he improvised, sending thousands of East Berliners streaming towards checkpoints where baffled guards eventually opened the barriers.