THE WW1 REBELLION OF RUSSIAN TROOPS SERVING ON THE WESTERN FRONT AT COURTINE FRANCE IN 1917. 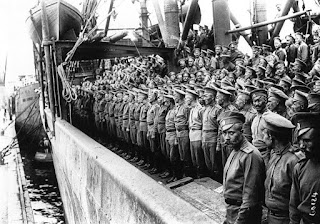 THE WW1 REBELLION OF RUSSIAN TROOPS SERVING ON THE WESTERN FRONT AT COURTINE FRANCE IN 1917.
https://www.youtube.com/watch?v=FsynSgeo_Uo

During the First World War an Expeditionary Corps [two brigades], consisting of about 20,000 men was sent from Russia via Vladivostok to Marseilles to fight with the Allied troops on the Western Front against Germany.
The Russians fought at Amiens along with the British troops. They were also involved with the French Army in heavy fighting at Chemin des Dames, where the French lost 250,000 men in April 1917 thanks to the great planning of General Robert Nivelle and faced a mutiny amongst their troops.
The Russian Brigades had taken heavy casualties also, and after the there was considerable disaffection amongst the Russian troops on the grounds that they "were fighting for the French and far away from Mother Russia", with whom they apparently saw no common cause.
This apparently lead to the Allied command segregating the Russians at a camp at Courtine: Camp Militaire, north west of Courtine by about two kilometres. ["west of Clermont, east of Limoges, north of Ussel"]
There was subsequently a "rebellion", including a refusal to fight, within the Russian ranks.
Two separate camps, basically one for each brigade, developed from the Courtine base. One had discipline problems but was able to be controlled to some extent and was used to suppress the other, which remained at Courtine and basically disintegrated as discipline failed completely.
The French response, after Russian authority collapsed, was to surround the camp and, using a newly arrived Russian artillery unit backed by French troops and artillery, they shelled the rebellious Russian encampment and also after some fighting in the camp, "order was restored".
I gather this exercise resulted in about 10 dead and 44 wounded Russians, plus an unknown number shot by their compatriots as they tried to leave their encampment.
The surviving troops were dispersed to numerous jails and camps in France and North Africa.
This tidbit of WW1 insanity is posted by,
Sir Richard…
http://bayo-hunter.blogspot.ca/
P.S. War really is a vast open air factory where the hours are long, unions are not permitted, safety conditions that are routinely flouted and people’s lives wasted for at times neither Good or Bad!
No more people have died on this planet then they would have died, if they were not killed in a War.
by Richard... 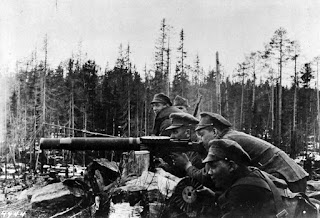 Posted by Sir Richard The Bayo-Hunter at 9:36 AM

Labels: It's a Long Way To Tipperary / Pack Up Your Troubles In Your Old Kit Bag - Robert Mandell