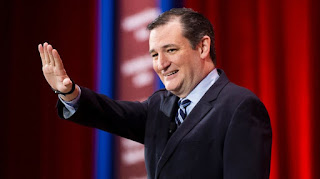 TED CRUZ
https://www.youtube.com/watch?v=oQBa2pTr9GU
President Chester A. Arthur was born on October 5, 1829, in North Fairfield, Vermont USA. President Barack Obama was born on August 4th, 1961, in Honolulu, Hawaii USA. Senator Rafael Edward "Ted" Cruz was born on December 22, 1970, in Calgary, Alberta Canada. He wants you to forget he was born in Canada.
Yes, Cruz is an American citizen because his mother is and was at time of his birth. But he wants his fans to think he is a “natural born” citizen, just in case he ever decides to run for President but conservative teaparty people can’t have it both ways, they can’t keep stirring the pot of whether Barack Obama was born in the U.S. (which he was) and keep insisting that to be eligible to run for President a candidate must be born on U.S. soil.  Being born in Canada, makes Cruz a Canadian citizen, as well, though Cruz claims he's "renounced" that. Officially, though, he aparently is still a Canadian unless he’s completed the official paperwork.
The Canadian government, there are six steps to prove eligibility for renouncing one's citizenship. Once eligibility is ascertained, Cruz would have to fill out an application and fork over a $100 fee the same amount is required to grant citizenship, in case you were wondering.
According to Canadian Citizenship and Immigration Canada, under the Canada's Citizenship Act, "children born in Canada are automatically Canadian citizens, unless they are born to foreign diplomats" (Ted’s parents were not diplomats and Ted’s dad at that time was a Cuban and not a US citizen) and hence "those who automatically become Canadian citizens do not need to apply for citizenship and have a Canadian Passport, duel citizen or not."
So yes, because Cruz released hus birth certificate (see Attached Below), we know that he was indeed born in Calgary, making him a Canadian citizen despite never formally applying for citizenship.
Ted says; “that I may technically have dual US and Canadian citizenship,” in a statement. “Assuming that is true, then sure, I will renounce any Canadian citizenship. Nothing against Canada, but I’m an American by birth and as a U.S. senator; I believe I should be only an American?”
This tidbit of silly is posted by,
Sir Richard...
http://bayo-hunter.blogspot.ca/
P.S. I also do not like Trump, for his persona is enough IMO, to gag a maggot. 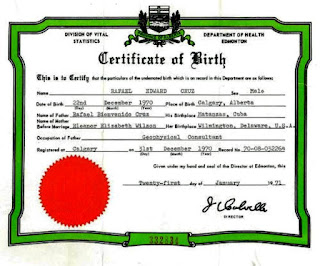 Posted by Sir Richard The Bayo-Hunter at 9:47 AM