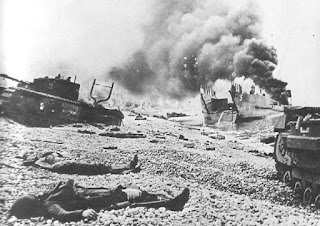 Of the nearly 6,090 strong Canadian contingent deployed that early August morning, 1,027 were killed, wounded or taken prisoner 2,340; an exceptional casualty rate of 68%. Some 2,210 Canadians of 4,963 who were sent made it back to England; nearly 1,000 of these never landed at Dieppe, as well, only 11 of the 60 tanks that were sent made it back. Another 2,000 troops were captured that terrible Aug. 19, and many spent the next year-and-a-half shackled to one another.

The British Commandos had lost 247 men, as for the other Commandos who participated twenty men of No. 3 Troop No. 10 (inter-allied) Commando participated in the raid. The various troops of No. 10 (inter-allied) Commando were generally known by their country of origin, be it Free French (No. 1 Troop), Dutch (No. 2 Troop), Belgian (No. 4 Troop), Norwegian (No. 5 Troop), Polish (No. 6 Troop), or Yugoslavian (No. 7 Troop). No. 3 was also known as X-Troop because it was composed of German speaking Jewish refugees from the continent. It was not until long after the war the origin of the men in this troop was made known. Fifty US Rangers were chosen for the ill-fated Dieppe raid these were the first US soldiers to fight against the Germans on the ground in Europe. Three US Rangers were killed.

The Royal Navy lost one destroyer (HMS Berkeley) and 33 landing craft, suffering 550 dead and wounded, seven Free French ships were part of the naval component and one of the six Hunt class destroyers supporting the landing was Polish ORP Ślązak. The RAF lost 106 aircraft to the 48 lost by the Luftwaffe (The total Luftwaffe losses were 23 FW-190 fighters, and 25 Dornier Do-217 bombers). There were at least 69 RAF squadrons committed. This included British (46), Canadian (9), Polish (7), Czech (2), Norwegian (2), Belgian (1), French (1), and New Zealand (1) squadrons. USAAF B-17s of 340th, 341st, 342nd, and 414th squadrons of the USAAF 97th Bombardment Group were also tasked.
The German Army’s casualties totalled no more than 591 with: 311 dead, 280 wounded

THE REAL REASON FOR THE DIEPPE RAID BUT THE BAD PLANNING AND SLAUGHTER IS STILL THE SAME: http://www.youtube.com/watch?v=wGR9qN8oxcQ

“Dieppe France has never forgotten what Canadians did that day, as you will see Canadian flags here every day and not just this 70th anniversary weekend August 19th 2012.”
LEST WE FORGET!
http://www.youtube.com/watch?v=YQ7z_eANAP4
Posted in Remembrance by Sir Richard…
http://bayo-hunter.blogspot.ca/
Posted by Sir Richard The Bayo-Hunter at 10:44 AM