SOMETHING HAPPENED ON MY WAY TO WW3 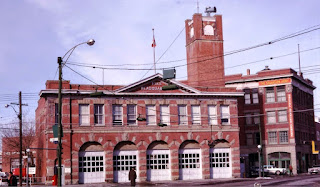 SOMETHING HAPPENED ON MY WAY TO WW3

For decades, from the 1950s through the 1980s, North Americans rightly feared that the existence of nuclear weapons was a pointed gun aimed at their entire civilization, regardless of who owned them. One bad leader, one awful mistake and the world could face "FIRE AND FURY"! Basically, the end of the world as we know it.
Then a funny thing happened, the Soviet Union with its thousands of nuclear weapons collapsed and with the biggest threat largely receded or out of our minds anyway.
The "new" problem wasn't nuclear weapons, it was "proliferation." Proliferation meant their nuclear weapons and those of their friends were fine; it was that those "bad countries" might get nuclear weapons that was the real threat, or so we were told.
What President Trump's impetuous comments remind us is that all nuclear weapons are dangerous, including our own. An American president and not some rogue dictator could make a mistake, overreact, or bluff themselves into a nuclear war they did not intend. Leaders, all leaders, are human. To err is human, but to err with nuclear weapons would be catastrophic. Perhaps it is time to take the danger posed by nuclear weapons seriously all nuclear weapons, even our own.
IN MY YOUTH I HEARD AN AIR RAID DRILL
1950/60’s CITY OF CALGARY; AIR RAID DRILL WITH SIRENS http://www.youtube.com/watch?v=jLo0aOfDrLY
In 1962 we were sent home with a note for our Mothers to sign, eat our lunch and then run back fast as we could to school so have our teacher could countersign our note with our, arrival back time at school for the Canadian Civil Defense.
Well, I always rode my bike (winter or not), so they made my friend Glen walks with me, so in case I had a blown inner tube or my chain fell off by walking I would then be equal like all the other kids.
“Please click on the forward arrow to start the below video”
http://www.cbc.ca/…/calgary-evacuates-operation-lifesaver-p…
More you say, then click below:
http://www.cbc.ca/…/calgary-evacuates-operation-lifesaver.h…
During the Cuban Missile Crises, I used to have strange dreams about a Nuclear War as I could not see why we were so concerned about Cuba??
Small, far away from Canada and I did not even know anyone from there? So, if it meant (as in my dreams), climbing up our basement steel support beams cause our home was gone, as I ran from Radio Active Wolves that I dreamed about, then let them have Cuba!!! The Russians that is, as they could have the place, I didn’t even like Bananas back then anyhow? So, when my Dad returned from one of his 2 jobs I asked him what would happen if, I did not make it home in time to be with our family?
To explain he took a slow drag off of his cigarette and flicked an extra ash onto the one that was already on the ground. Then said; “see those 2 ashes, well (as he used his shoe to join them together), the Atomic bomb will turn us all into ash so fast we will not feel a thing and all of us will then be one ash everywhere so you need not worry because we will be together and those Wolves will be ash as well, hurting no one.” My Dad as far as I was concerned never lied so I knew it was the truth and I felt a bit better.
So, when the Big Air Raid Day came I told my friend Glen what my Dad said and we walked very slow and even went to Dairy Queen as I had $.25, which was enough for 2 milk shakes! Mine was strawberry and as lived further away than Glen I was the last one into school.
My grade 2 teacher (who told all us that Friday morning, October 26th, 1962 that by tomorrow morning on a Saturday. On the Most Dangerous Day in Human History we were all going to die?). The girls in the class cried and inside I went ape! Also, right then, I was called up to my grade 2 teachers desk; because I was the last kid in the school from the drill. Due to the perceived fact that I was late. I did not take the Air Raid Drill serious, so I got a both hands strapped with the leather strapping belt in front of whole class! YES, I cried more for affect to stop the punishment. https://www.youtube.com/watch?v=K2dZUHi0X38 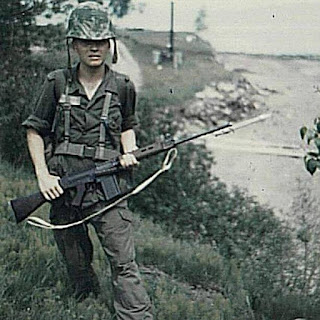 When after a decade, I was in the Royal Canadian Air Force, during basic training, we learned all about, Nuclear, Biological, Chemical Warfare and we had a sign posted as you can see here. This sign was posted all over the base, which made me just as happy as that Strawberry Shake did a decade earlier!
Oh, I also Love this film as it informs you how to survive a Nuclear, Biological, Chemical Warfare, now put this thought through you heads, it is summer, and you have to relieve yourself, also try opening and eating a can of peaches for shit’s and giggles, now there is an hour of decamination toasty fun, while at the same time someone with an AK -47 is coming to join you for lunch but with very bad table manners?
http://www.youtube.com/watch?v=9xywdF-gQ8U
So now for a song, SO LET US SING! :)
http://www.youtube.com/watch?v=wxrWz9XVvls

P.S. There are no functioning Civil Defense Sirens remaining in Calgary. The last working ones were either removed or disabled long ago at least 20 years if not 30. The authorities finally had to admit they would serve no purpose because if nukes were airborne and on their way to Calgary, sirens would not allow anyone within earshot enough time to escape the city. Better to be incinerated in the comfort of your own home than whilst gridlocked on the number 2 Highway North!
The sirens are no longer tested but some still exist all over Calgary. Mostly on large old buildings or old towers. In theory should they need to be employed it is typically done at a main trucking station much like fire alarms. These trunks used to be old AGT (TELUS) telephone "houses" which are now TELUS data centers.
These are still largely hooked up and I have heard them go off (by accident) more than once in the last 10 years. The last one that I knew of, still up on its own was in the Renfrew area. This one came down in the early 90's not too long after the fall of the Soviet Union.
It's funny as a kid these Air Raid Sirens were just fixtures of our neighborhoods, but it retrospect when they came down; they were like our own little piece of the Berlin Wall coming down too. https://www.youtube.com/watch?v=PgqhaZmPFRg
A Bomb Run
https://www.youtube.com/watch?v=w_d7wa0cxDU 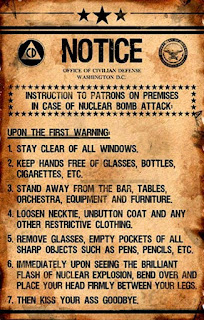 Written By,
Richard Abbenbroek...
http://bayo-hunter.blogspot.com/
Born in Calgary PRAY FOR PEACE!
Posted by Sir Richard The Bayo-Hunter at 1:20 PM