NO SHAME - MUCH TO GAIN 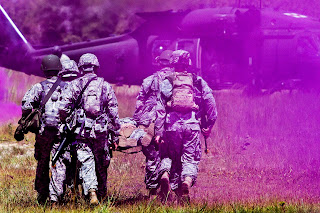 NO SHAME - MUCH TO GAIN
https://picasaweb.google.com/113417960202172615288/UNITEDSTATESMILITARYASirRichardUSDoDCOLLAGE?authkey=Gv1sRgCJz7w975n5OvgAE#slideshow/6172306867899131202
UNITED STATES MILITARY - A Sir Richard US DoD COLLAGE
but not Sir Richards Photos.
PURPLE HAZE
https://www.youtube.com/watch?v=k3y9lh-1nAE
The Jimi Hendrix song Purple Haze which other than the urban drug lore.
Hendrix claimed this song was inspired by a dream where he was walking under the sea. In the dream, he said a purple haze surrounded him, engulfed him and got him lost. It was a traumatic experience, but in his dream his faith in Jesus saved him.
In his later years, Jimi's concept of the "electric church" filled his interviews and discussions. His electric church broke psychological barriers, it transcended age and race and gender and, well, almost everything. Which is maybe why it stays with us old hippies and also; especially Vietnam Vets. Personally like the photo, Purple Haze meant to me, the smoke that the Canadian Armed Forces and U.S. Army plus Marines used for marking LZ’s Chopper Evac Sites.
Jimi Hendrix today would have been 73? "Tomorrow or just the end of time?"
A Sir Richard Post
http://bayo-hunter.blogspot.ca/
Posted by Sir Richard The Bayo-Hunter at 9:07 PM