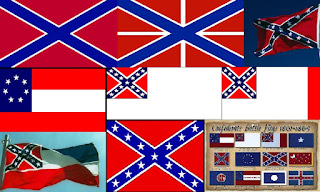 RUSSIAN SEPARATIST AND CONFEDERATE FLAGS
The flag of Russian Separatists in eastern Ukraine. The CSA battle flag of the US Civil War and the Ukraine Russian Separatist flags from in Tsarist times are they today the same?
The three pan-Slavic colours of the Russian flag (red white and blue), simply substituting white for one of the colours on their existing regional flags. These flags often bear the Russian two-headed eagle, replacing the depiction of St George on the shield (the ‘silver horseman in a blue cape…’), with the local oblast (regional) coat of arms; however, the coat of arms for the Donetsk People’s Republic is an exception, showing the Archangel Michael. While some have noted the flag of Novorossiya mirrors the Confederate battle flag, this is just a coincidence. Red, white, and blue are the colours of Russia and the Novorossiya flag is almost a dead copy of the Russian naval jack.
This flag consists of the union of St. George's and St. Andrew's cross, like the Great Britain's flag, but on reverse order of colours. The naval jack was part of a set of flags designed by Tsar Peter I the Great himself. At the time Peter the Ist travelled to many European states, with the goal of forming an anti-Ottoman alliance (he failed) and also modernizing Russia. On his stay in England, the Union ensign may have inspired him to create the Russian own jack?
But the flag anyway has a strong significance to Russia: St. Andrew, having preached along the Black Sea and region, is Russia's patron saint (curiously Ukraine's too) and St. George has been Moscow's city patron saint for centuries. The two saints are also names important Russian military orders.