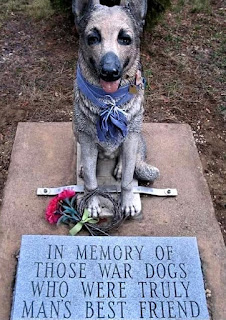 WAR DOGS
In ancient times, dogs, often large mastiff- or molosser-type breeds, would be strapped with armor or spiked collars and sent into battle to attack the enemy. This strategy was used by various civilizations, such as the Romans and the Greeks. While not as common as in previous centuries, modern militaries continue to employ dogs in an attack role. SOCOM forces of the US military still use dogs in raids for apprehending fleeing enemies or prisoners, or for searching areas too difficult or dangerous for human soldiers (such as crawl spaces).


Another program attempted during World War II was suggested by a Swiss citizen living in Santa Fe, New Mexico. William A. Prestre proposed using large dogs to kill Japanese soldiers. He convinced the military to lease an entire island in the Mississippi to house the training facilities. There the army hoped to train as many as two million dogs. The idea was to begin island invasions with landing craft releasing thousands of dogs against the Japanese defenders, then followed up by troops as the Japanese defenders scattered in confusion. One of the biggest problems encountered was getting Japanese soldiers to train the dogs with, because few Japanese soldiers were being captured. Eventually, Japanese-American soldiers volunteered for the training. Another large problem was with the dogs; either they were too docile, did not properly respond to their beach crossing training, or were terrified by shellfire. After millions of dollars were spent with inconclusive results, the program was abandoned.

The Soviet Union used dogs for anti-tank purposes beginning in the 1930s. Earlier anti-tank dogs were fitted with tilt-rod mines and trained to run beneath enemy tanks, which would detonate the mines automatically. However, the dogs were trained with stationary Russian tanks and very seldom ran under the moving tanks, instead they were shot as they ran beside the moving tanks. When both Russian and German tanks were present, the dogs would preferentially run towards the familiar Russian tanks.

This info posted by,
Sir Richard...
Man is the beast, not the Dogs
Posted by Sir Richard The Bayo-Hunter at 12:07 PM