THE TOP 5 SPOOKIEST ALBERTA HERITAGE SITES.
1. The McKay Avenue School: Built between 1904 and 1905, the McKay Avenue School is an early twentieth-century, three-story building situated in the heart of Edmonton’s Downtown district. The building has a red-brick façade with sandstone trim, round arches over the windows, and imposing columns flanking the main entrance. The building hosted the inaugural session of the Alberta Legislative Assembly. It’s also connected to early educational institutions in Edmonton and is an example of stately Richardson Romanesque architectural style. 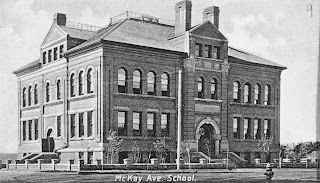 McKay Avenue School circa 1913, Edmonton, said to be haunted by spirits of children and a worker who fell from the roof to his death (photo courtesy of the Provincial Archives of Alberta).


The school is now home to the Edmonton Public Schools Archive and Museum run by the Edmonton Public School Board. Tales abound of possible paranormal activity in the building including objects mysteriously moving around, water taps found running, and lights being turned off and on by mischievous spirits. Strange eerie noises heard coming from empty parts of the building are common. Over the years some staff reported finding chairs knocked over and strewn around rooms. Others recount occasions when blinds that had been left up were pulled down and even pulled right off the windows. The school is said to be haunted by the apparition of a worker who tragically fell to his death from the building’s roof in 1912. Visiting psychics have also reported ghostly children running up and down the fire-escapes on the exterior of the building. 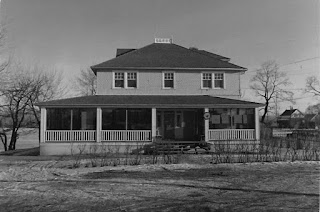 2. The Deane House: Deane House was built in 1906 as the official residence for the incoming North West Mounted Police commanding officer, Superintendent R.B Deane. The building’s construction was carried out by prisoners from Fort Calgary and supervised by Deane himself. The two-and-one-half-story house with a low hip roof and two extra wide side porches was used by the superintendent for entertaining visiting dignitaries. Deane House served the Mounted Police until 1914, when the Grand Trunk Pacific Railway expropriated the Fort property for a rail terminal. The structure was then moved to the southeast corner of the site for occupation by the station agent. In 1929, it became privately owned and was transported to its third location immediately opposite from the Fort site on the east side of the Elbow River. The old house functioned as a well-known rooming house called the Gaspe Lodge until 1973. It was purchased by the City of Calgary in 1973 and functioned as a combination of artists’ studios and gallery until 1978. The Deane House was finally granted historical designation in 1978 for being possibly the only remaining intact building from the Fort Calgary site.
The Deane House in Calgary has a rich history and there are many accounts from staff and visitors of spooky activity at the house.
There are several stories about unusual deaths occurring at the residence, including a man being gunned down on the porch. A young woman is also rumoured to have jumped to her death from the second story and another woman was said to have been murdered by her enraged husband. Visitors’ accounts describe hearing phantom noises all over the house and disembodied laughter is often heard coming from the front foyer. Guests and staff often speak of hearing phantom ringing from an antique phone and the musical notes from a Victrola. Others report seeing the apparition of an elderly gentleman smoking a pipe in Deane’s study, accompanied by the distinct smell of tobacco wafting through the air. A mysterious deep red stain is rumoured to periodically appear somewhere in the attic, often changing in size and shape, no matter how many times it’s been washed away.
3. The Frank Slide: The extensive debris field of the Frank Slide is part of the cultural landscape encompassing roughly 508 hectares between the towns of Frank and Bellevue. On April 29, 1903, 82 million tons of rock fell from the eastern face of Turtle Mountain and collapsed into the Crowsnest River valley in a matter of seconds. The mountain face toppled and slid approximately four kilometers across the valley, rising to 152 meters on the other side. The slide buried the southern end of the town of Frank and completely destroyed a two kilometer stretch of the Canadian Pacific Railroad through the Pass. The slide disaster also obliterated the mine plant of the Canadian-American Coal Company. Seventeen miners were trapped inside the mountain but fortunately managed to escape by tunnelling upwards to the surface. After the dust settled, the catastrophic slide event had reportedly killed over seventy people. The Frank Slide is considered the site of one of the worst natural disasters in Alberta’s history and is now a provincial landmark. 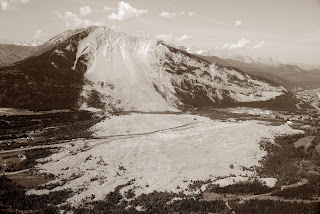 Frank Slide in the Crowsnest Pass is said to be haunted by spirits looking for their missing loved ones. (Photo Credit: Frank Slide Interpretive Centre (colour altered))
With so many people reported dead or missing in the massive landslide, many of the bodies were never recovered from the rubble after the disaster. People who visit the site often report accounts of seeing a strange and unnatural mist moving over the area of the debris field. The appearances of unnerving ghostly figures are often described by frightened visitors viewing the wreckage from the slide. It is thought that the apparitions are wandering spirits attracted to the site still looking for their missing loved ones.
4. The Ukrainian Cultural Heritage Village: Located 50 km east of Edmonton along Highway 16, the Ukrainian Cultural Heritage Village is an open-air heritage museum recreating the life of early Ukrainian pioneers that settled in east central Alberta from 1892 to 1930. Costumed interpreters help visitors travel back in time to hear the stories of the pioneers’ triumphs and hardships in one of Canada’s oldest Ukrainian pioneer settlements. The village contains more than 30 relocated and restored historic structures including a sod house, a one-room schoolhouse, blacksmith shop and three churches. 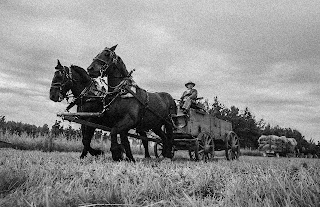 At the Ukrainian Cultural Heritage Village it is said that an apparition of a wagon master with a silent team of horses rides through the site. (Photo Credit: Travel Alberta (colour altered))
One of the more famous ghost stories tells the tale of the apparition of a spectral wagon master seen riding through the site with a silent team of horses. It is said the ghostly presence is seeking workers to accompany him in his phantom wagon. Other paranormal accounts describe mysterious light anomalies and spooky footsteps in empty buildings. Visitors also describe hearing whispers from disembodied voices and phantom cries coming from an empty cradle in one of the residences. Other chilling accounts describe feelings of being watched, seeing glimpses of shadowy faces in windows and sightings of strange translucent figures wandering throughout the site at night. Perhaps the original inhabitants of the residences followed the buildings to the site and still linger on.
5. Fort Saskatchewan, N.W.M.P. Post: Located on the edge of a terrace along the North Saskatchewan River, the Fort Saskatchewan N.W.M.P Post was only the second fort constructed by the North West Mounted Police. It was completed in the spring of 1875 and went through several structural modifications throughout its history. During the 1885 rebellion scare, the number of men stationed at the fort increased substantially and so did the number of buildings. Shortly afterwards, in 1889, the post became the headquarters for the N.W.M.P. “G” Division and acted as the focal point of regional security. The surrounding palisades and old buildings were dismantled to make room for new construction. The post was used as a base of operations for their far-reaching patrols, many extending as far as Fort Simpson and the Chesterfield Inlet, N.W.T. In 1911, the property was transferred to the provincial government for the purpose of construction of a new jail. The site was later levelled for the construction of a new correctional institution and today only a corner of the Fort grounds remains exposed. 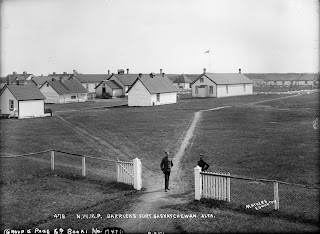 Fort Saskatchewan North West Mounted Police Post, where visitors have heard strange noises and had ghost sightings (photo courtesy of the Provincial Archives of Alberta).
Because of the site’s role with the N.W.M.P., many criminals were hanged at the outpost on this historic site. Visitors often recount tales of seeing ghostly figures silently wandering the grounds and lurking in the preserved buildings at night. One of the most commonly talked about ghost tales is the story of an eerie female specter believed to be the apparition of infamous “Mob Princess” Florence Lassandro who died in May 1923. She is said to have had the distinction of being the only woman hanged at the site. It is rumoured that she was buried in an unmarked grave somewhere nearby. Some believe her restless spirit now haunts the surrounding grounds of the historic site. Other visitors have had experiences and sightings of a small girl. Spine-chilling disembodied voices, strange whispers and phantom footsteps are also described by visitors to the site. Other paranormal accounts describe objects moving mysteriously on their own and strange light anomalies in various places inside the buildings and around the grounds.
Written By: Pauline Bodevin.
https://albertashistoricplaces.wordpress.com/2015/10/28/haunted-heritage/

Posted for U all, by Sir Richard…
http://bayo-hunter.blogspot.ca/
Note: I do not believe in Ghosts, they might be something but IMO they are Not Ghosts! Just saying, what this Christian thinks…
HAPPY HALLOWEEN! Booo....
Posted by Sir Richard The Bayo-Hunter at 2:41 PM