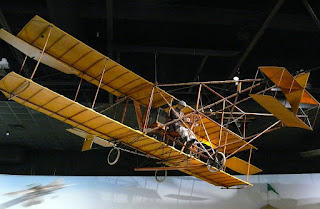 https://www.youtube.com/watch?v=ItFbQw4Tzlo
Howard Le Van first pilot to fly an aircraft over Calgary Alberta. In July 1911 Howard Le Van flew a Curtiss Golden Flyer owned by J. Stobel during the Calgary summer fair. Because of the muddy airfield, the aircraft had difficulties taking off. It was able to get into the air once on the first day, but crashed into a fence causing damage to the landing gear and wings. After repairs, Le Van was able to fly for about five minutes the next day, but more damage occurred when he hit a gopher hole upon landing. On the final day, fairgoers could pay 10¢ to enter the tent where the Golden Flyer was parked and admire it. IMO we should name our airport the; Howard Le Van International Airport!
Posted by Sir Richard
http://bayo-hunter.blogspot.ca/
Posted by Sir Richard The Bayo-Hunter at 12:30 PM