https://www.youtube.com/watch?v=UkPhGRQzboE
For mag entry try either link:
http://issuu.com/highlinemagazine/docs/winter_2009/15?e=1
http://issuu.com/highlinemagazine/docs/winter_2009/15?e=0/1433372
At the height of the Cold War, a plot surfaced in the Bow Valley. The plan was to build a high-tech, ultra-secure storage facility overlooking Lac des Arcs in the heart of Mt. McGillivray. It was an ambitious idea, and, given the paranoia about nuclear war, it probably made good sense. But today, it is simply an oddity.
The scheme failed but not before workers had dug a tunnel into the north-facing slope of McGillivray, along with a handful of chambers, as part of what was envisioned as an extensive network of vaults that would protect the most important documents of the day. Often believed to have been dug as a secure archive by the Canadian government, the cavern had, in fact, been opened by a private company, Rocky Mountain Vaults & Archives.
According to Alberta Sustainable Resource Development, the company obtained two licenses from the Alberta government in 1969 – one for use of the caverns as a vault and the other for access – but it is believed that the tunneling began much earlier, although no firm date has yet been found.
Rocky Mountain Vaults & Archives saw Mt. McGillivray as the perfect location for an underground fortress as it promised to provide “absolute security for vital records,” according to a brochure promoting its idea. It was a hefty promise but a logical one given its location 500 feet beneath the mountain’s western slope.
“Here, deep inside a mountain, is the world’s near perfect archive. Physically perfect…functionally perfect, built for maximum protection against any form of destructive vice, from mildew to hydrogen bomb. The remarkable limestone vaults have no security limitations. They are: Fireproof, flood proof, wind proof, rodent proof, mildew proof, cave-in proof, bomb proof, theft proof, NBCW proof” RMVA bragged in its brochure.
Along with the high level of protection, the company also envisioned white-painted walls, fresh air piped in to provide ideal document storage conditions, private vaults, an entrance portal, a lounge and a three food wide reinforced sliding concrete door along with 24-hour security personnel.
The company’s long-term goal was to offer a facility that would allow businesses and government to start over after the world had erupted into chaos.
“In the event of a catastrophic happening, whether localized or widespread, man-made or from natural perils, many of these data and documents must be protected and preserved in order for business in general to survive and successfully recover from any major disaster.
“With this in mind, Rocky Mountain Vaults & Archives Ltd. has planned a vault storage area designed to eliminate many of the problems associated with safekeeping and industry and government in the event of a catastrophe.”
It was an audacious and pessimistic plan and the brochure itself edges towards the ridiculous with a simple childlike cut-away drawing of the proposed vault system and a second diagram of men in cardigan sweaters sitting in an underground reception room smoking cigars and pipes.
While the brochure provides much of the context, the only way to get a sense of the audaciousness of the plan is to walk through the cave opening and enter the tunnel carved into the grey limestone cliff.
Once inside and out of the wind, the air grows warmer, while further into the tunnel, the light and the hum of traffic on the Trans-Canada Highway, as it curves around Lac des Arcs, begins to fade.
Enough light, however, filters down the tunnel to reveal the end of the tunnel and where a new passage opens to the left. But turn and walk into the first chamber, and the light quickly vanishes becoming as dark as a mine shaft, as only a cave can get.
But with a strong flashlight it’s easy to pierce the darkness and discover the first of two 80-foot by 25-foot caverns, along with what might have been the reception lounge. The floor is flat but not smooth, and the sound of water dripping onto stone can be heard somewhere in the blackness. 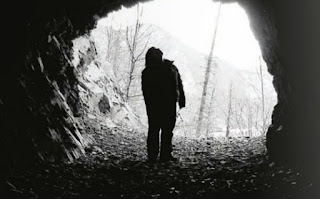 It’s big, it’s dark, but what does the cavern mean to us today?
When it was being constructed on the 127 acres of land leased from the Alberta government in what is believed the late-1950s, Bob Smith, a long-time local who now lives in Canmore, said that when locals heard what was going on 100 feet above Lac des Arcs, they laughed, shook their heads and carried on.
It was the late ’50s, early ’60s when the Cold War was really fizzy. When everybody was panicking and building bomb shelters and so on down in the States, and this guy thought it would be just great to have this for all the banks and the government and so on to put all their important papers in,” Smith said in an interview.
“I remember at the time everybody laughed; this is great we’re going to put all of our valuable documents in there and after we’re vaporized we’ll be safe. Everybody thought the whole things was a farce.”
This grand farce was even featured on Canadian Learning Television when the vault appeared in a 2006 episode Underground, part of Exhibit Eh!, a series of programs produced by Delta, B-based Big Red Barn Entertainment that sought out strange Canadian stories an Mysteries.
Smith appeared in that episode alongside the vaults guiding the program’s hosts into the depths where four stumps sat around an old fire – a far cry from the illustration of the men in their cardigans.
While it is easy to poke fun at the vault, Dene Cooper, an Exshaw resident and passionate historian, said it is an example of how the world was coping with the anxiety of living in a nuclear age.
“It was a world coming to grips with the potential of nuclear conflict in North America for the first time,” he said. “I think we’ve forgotten what the Cuban Missile Crisis was about. Now (the cavern) looks weird because it is no longer that time. It is hard to realize just how paranoid the social thinking was at that point.”
Cooper said he believes the vault failed because of a lack of financing and moisture in the caverns. Even though the enterprise did fail, what remains of the Rocky Mountain Vaults & Archives has left the Bow Valley with an indelible record of the Cold War. And it is a record that obviously has much appeal, given the number of visitors the vault appears to get and the quantity of modern-day artefacts left lying around.
A campfire marked by a circle of stones can still be found inside the cavern, while the flattened metal cups that hold tea candles litter the floor. On a smooth part of the limestone wall near the entrance, someone has traced their hand in pencil and then added an extra finger. Below that, a fin-backed monster appears to be crushing or eating a stick man. Outside the cave mouth is another fire ring and a single beer can with the telltale puncture hole near the bottom of the can.
While all of these elements add another layer to what is already a strange story and a strange place, an odd melancholy arises upon seeing such a bold idea reduced to something weird and creepy.
But it certainly gives the Bow Valley a good story.
Keep in mind that the vault is part of the Bow Valley Wildland Park, and, according to Steve Donelon, heritage protection team leader for Alberta Tourism, Parks and Recreation, it is protected under Alberta’s Provincial Park Act.
“Why it is there is beyond me. I find it very odd,” he said.

Rob Alexander
Rob is a writer, journalist, photographer and historian based in Calgary and author of “The History of Canmore,” published by Summerthought Publishing of Banff, AB.

This Story Was Posted by Sir Richard...
http://bayo-hunter.blogspot.ca/
NOTE: when I was young, a group of us drove a VW into this cave easily. It is now hidden by trees that have grown taller since 1978. See This Photo by Sir Richard: 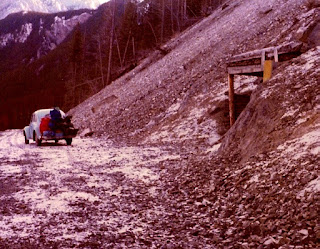 Posted by Sir Richard The Bayo-Hunter at 6:08 PM