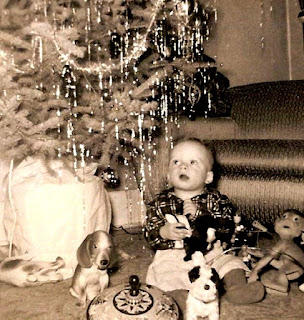 https://www.youtube.com/watch?v=ruirnUfaC5U
Oh, F.Y.I. tinsel for Christmas Trees was invented in Nuremberg Germany around 1610. Tinsel was originally made from extruded strands of silver and because silver tarnishes quickly, other shiny metals were substituted so after 1610 up to 1972 was made of Led. Ahh the good old days, Led gasoline in every car and Led paint for me to help with my teething on my crib!
Tinsel is thought to have made its first public appearance in England in 1846. Queen Victoria and Prince Albert were illustrated in the Illustrated London News, standing with their children around a Christmas tree decorated with tinsel, candles, and small bead ornaments. Because of Queen Victoria’s popularity, the Royal family’s decorated tree became the height of fashion sweeping through both the British and East Coast American Societies.
According to the Oxford Dictionary; the word tinsel comes from an Old French word “estincele”, which means sparkle.
This shiny decorative material is a great toy to your pets, especially for playful pets such as cats and dogs, although for them and little humans it is still dangerous for them to eat, which they most likely would try So Be Careful!
HAPPY TOXIC CHRISTMAS!
Oh, Joyce’s Fav Christmas Song
https://www.youtube.com/watch?v=CcJFc1Y-6OQ
By Sir Richard, yes the kid in the photo…
http://bayo-hunter.blogspot.ca/
Posted by Sir Richard The Bayo-Hunter at 3:23 PM

Labels: Snoopy's Christmas - Snoopy vs. The Red Baron - the Royal Guardsmen. Irish Rovers - Grandma Got Run Over by a Reindeer