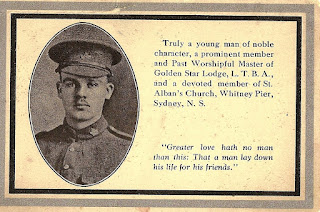 100 years ago on a WEDNESDAY SEPTEMBER 6TH 1916 as of the overall Battle of the Somme, Private William Broughton lost his life for King and Country, waiting to take part in the The Battle of Courcelette; so let us set the stage.
Life in the trenches, the infantry’s home for much of the war, involved a day-to-day routine of work and leisure.
Each dawn, the usual time for an enemy attack, soldiers woke to “stand-to,” guarding their front line trenches. Afterwards, if there had not been an assault, they gathered for inspections, breakfast, and the daily rum ration.
Following morning stand-to, inspection, and breakfast, soldiers undertook any number of chores, ranging from cleaning latrines to filling sandbags or repairing duckboards. During daylight hours, they conducted all work below ground and away from the snipers’ searching rifles. In between work fatigues, there was often time for leisure activities. Soldiers read, kept journals, wrote letters, or gambled.
Food well unfortunately, soldiers did not have the luxury of hot meals for much of the war. They had little variety in food, which mostly came in tins or cans. If one was lucky, a soldier would be afforded rum, or receive a food packet from the Red Cross. At most times, however, soldiers had to rely on what they had, typically stale crackers and unappetizing salted meat.
Boredom for the troops not serving on the front lines was a common ailment. Sometimes they had many chores to keep them occupied; filling sandbags, mending barbed wires, and rebuilding trenches after explosions, for example. Although the soldiers were often bored, they would often not allow themselves to sleep, and sleep deprivation was common. They had to be on the lookout for constant bombardments, and, if you were caught asleep by your commanding officer, you would be severely reprimanded. Other distractions from the tedium of troop life included the rotation of troops, cleaning your weapon, daily inspections, and mining. Many soldiers also had a bit of leisure time, in which they could play cards, read and write letters to and from home, and look at old postcards they may have received and hunt rats/lice.
Letters and Writing were an important part of life as a soldier. Receiving and writing them helped keep them sane, and could take them away from the horrors of trench life. Every week an average of 12.5 million letters were sent to soldiers by family, friends, and girlfriends. In writing letters, soldiers would often conceal the horrors of trench warfare. For others, the horrors would be their inspiration, and some soldiers would write poetry and narratives in the trenches. These first-person accounts would become essential for our understanding of WWI today.
Nighttime in the trenches was both the busiest and the most dangerous. Under cover of darkness, soldiers often climbed out of their trenches and moved into No Man’s Land, the blasted landscape separating the two armies. Here, work parties repaired barbed wire or dug new trenches. More aggressive operations involved patrolling for enemy activity or conducting raids to kill or capture enemy troops or to gather intelligence.
In the Trench Cycle luckily, troops were not expected to serve entirely in the front line. They would rotate between the three lines: the front line, the support line, and the reserve line, and then spend a short period in rest, before beginning the Trench Cycle again. The time spent in each section varied from sector to sector. In busier sectors of the war, soldiers would spend far longer in the front line than usual and less time at rest than usual. In a year only around two months would be spent at rest, and not typically at leave. In a year, perhaps two weeks would be spent at leave if a soldier is lucky.
Even in the so-called quiet moments, trench life witnessed a steady trickle of death and maiming. Outside of formal battles, snipers and shells regularly killed soldiers in the trenches, a daily phenomenon known as “Trench Wastage.” This regular death toll ensured the need for constant reinforcements. In the 800-strong infantry units, “Trench Wastage” rates were as high as 10 percent per month, or 80 soldiers killed or incapacitated.
Private William Broughton died at the 18th General Field Hospital, France, on the 6th day of September, 1916, as stated from a “Gunshot Wound To His Head” (probably a sniper) that Private William Broughton received just a week before the Battle of Courcelette, which was as I said earlier part of the much larger Battle of the Somme. Private William Broughton made it to the No. 18 General Field Hospital Camiers sometime the same day the sniper shot him. He was only in the 21st year of his life, on Wednesday September 6th 1916.

What Private William Broughton and Others were waiting for in there part of the line:
The Battle of Courcelette September 15th, 1916.
http://pages.interlog.com/~fatjack/somme.htm
Battle of Courcelette,. This was an episode in the fighting in the Somme valley in France in the summer and autumn of 1916. On September 15, the Canadian Corps attacked the German trenches before the village of Courcelette and before nightfall the village had been captured. The operation was notable as the first occasion on which the Canadians acted in conjunction with some of the the newly-invented tanks.
http://www.veterans.gc.ca/eng/remembrance/memorials/canadian-virtual-war-memorial/detail/496986?William%20Broughton

Additional information: Son of Silvanus and Christena Broughton, of Sydney, Nova Scotia.
Casualty Type: Commonwealth War Dead
Grave/Memorial Reference: X. B. 19A.
Private William Broughton Rests in this Cemetery:
ETAPLES MILITARY CEMETERY
Country: France
Location Information:
Etaples is a town about 27 kilometres south of Boulogne.
The Military Cemetery is to the north of the town, on the west side of the road to Boulogne.
Historical Information: During the First World War, the area around Etaples was the scene of immense concentrations of Commonwealth reinforcement camps and hospitals. It was remote from attack, except from aircraft, and accessible by railway from either the northern or the southern battlefields. In 1917 an increase of 100,000 troops were camped among the sand dunes and the hospitals, which included eleven general, one stationary, four Red Cross hospitals and a convalescent depot, could deal with 22,000 wounded or sick. In September 1919, ten months after the Armistice, three hospitals and the Q.M.A.A.C. convalescent depot remained. The cemetery contains 10,773 Commonwealth burials of the First World War, the earliest dating from May 1915. 35 of these burials are unidentified.
http://www.cwgc.org/search/casualty_details.aspx?casualty=496986 http://www.cwgc.org/search/cemetery_details.aspx?cemetery=56500&mode=1

Canadian Book of Remembrance that is housed in Canada's Peace Tower
http://www.veterans.gc.ca/eng/remembrance/memorials/books
Page 59, #49: Pte. William Broughton is on Page 59, #49 down on the left side. 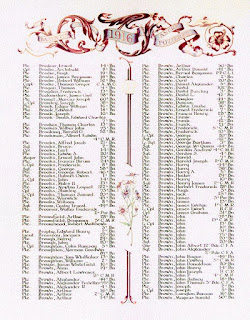 IN FLANDERS FIELDS the poppies blow
Between the crosses row on row,
That mark our place; and in the sky
The larks, still bravely singing, fly
Scarce heard amid the guns below.

We are the Dead. Short days ago
We lived, felt dawn, saw sunset glow,
Loved and were loved, and now we lie
In Flanders fields.

Take up our quarrel with the foe:
To you from failing hands we throw
The torch; be yours to hold it high.
If ye break faith with us who die
We shall not sleep, though poppies grow
In Flanders fields.
**********************
World War 1 Slide Shows:
WW1 #1-100 YEARS AFTER. COLOURED PHOTOS
https://photos.google.com/share/AF1QipMD7JDr8RZE5vXaPX2UUj00bxwVP3-YXBsGa5S87MzOO0LhvZt3X-H14l_OxmH7jQ/photo/AF1QipN8rQt4TWvO2fOAMjmD2rNfIUnfAfiNe2QKfVfl?key=RFh6ZFVZblMzTkk3QkE1TTd6UlVhRWVaNU9aakt3
Click top right hand corner and then 3 dots for slide show.

WW1 #4 - VERDUN 100 YEARS AFTER - LEST WE FORGET.
https://photos.google.com/share/AF1QipNvrvOllAspNo_UWPe8k6YQPwRbIMUIZ0QNabTdAer_ftNx4TXILTpVClqrDUb1jg/photo/AF1QipNSZvyiwJgw9lhHQCz0jelQKM43ZyLj2XWMAeyI?key=dTdDQ1BpRVI4SHdmM0dmc2VTRC0zUEw5M3ZERlBn
Click top right hand corner and then 3 dots for slide show.

Posted in loving memory from William Broughton's great nephew,
Richard Abbenbroek...
http://bayo-hunter.blogspot.ca/
At the going down of the sun
And in the morning
We will remember them...
May God give His grace to all!
Amen... 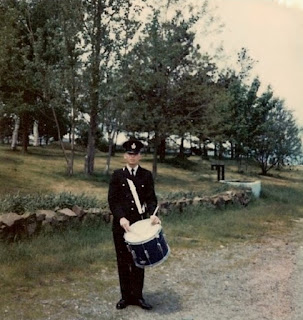 Posted by Sir Richard The Bayo-Hunter at 7:39 AM