538 BUFFALO FREEDOM OF THE CITY PARADE 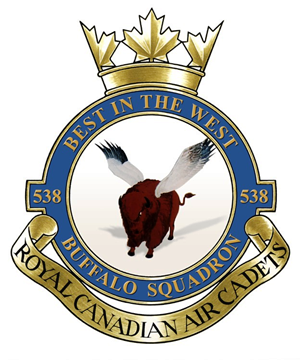 SIR RICHARD'S PHOTOS OF "538 BUFFALO FREEDOM OF THE CITY PARADE"
My Photos: https://picasaweb.google.com/116831131707285449605/538BuffaloRCASFreedomOfTheCityParade?authkey=Gv1sRgCJaRqJTc1qyx0QE#slideshow/5731700286164184130This Year we are celebrated our 60th Anniversary Formation as an Air Cadet Squadron with a “Freedom of the City Parade”. I was given the honour to inspect the Cadets along with the dignitaries; Deputy Mayor Gordon Lowe, Captain Ricard, Chief Warrant Officer Tran, so this is why I have no photos of the inspection of Royal Canadian Air Cadets 538 Buffalo Squadron Cadets.Royal Canadian Air Force Marchhttp://www.youtube.com/watch?v=MJbmOF3WxZw“Freedom of the City” the Story Behind the Ceremony:This year 538 Buffalo Royal Canadian Air Cadet Squadron is celebrating its 60th Anniversary. In honour of this 538 Squadron was granted Freedom of the City. A time honoured tradition dating back as far as ancient Rome.The Freedom of the City is one of the most prized honours that a community can bestow upon a military unit. Citizens of a municipality express their affection and esteem for a military unit by granting this honour. This gives a unit the privilege of marching through the community with drums beating, Colours flying and bayonets fixed. A community will grant freedom of the city for one of two reasons: the municipality has enjoyed a long and happy relationship with a unit; or, to mark a people's gratitude for heroic service.Back in the days of the Roman legions it was a capital offence to enter the city while in formation or with their weapons. If a one of these legions had shown an act of heroism or were considered to be of high honour, then they may have been granted Freedom of the City. This meant they would not have to disarm or break ranks before they were allowed into the city. This was extremely rare as it meant the city would be allowing for considerable risk. I think we have most have heard of the Trojan horse or Julius Caesar!!The British continued this tradition by only allowing military units to enter their cities after they were assured that the troops would be on their best behavior and they had identified the purpose of their presence. Once understood the Chief Magistrate or the Lord Mayor would grant them Freedom of the City.Today it remains an honoured tradition and a wonderful Canadian Civic Recognition to be bestowed upon an organization. A version you may be more familiar with is a civilian being awarded the Key to the City which is more prominent in the United States. Even more, Calgary’s own White Hat ceremony can trace its roots back to these traditions.So What About 538 Buffalo Royal Canadian Air Cadet Squadron?As I said above, 538 Buffalo Squadron this year celebrates its 60th Anniversary as an Air Cadet Squadron in the City of Calgary. Sixty years of Cadets who have had their focus in life through Air Cadets on citizenship, leadership, physical fitness, general aviation and stimulating an interest in the activities of the Canadian Forces.The majority of Cadet training takes place at our squadron during the regular school year with a percentage of Cadets selected for summer training courses at various Cadet summer training centers located across Canada. Central to the Air Cadet program are the gliding and flying scholarships offered to Air Cadets who qualify. One in five private pilots in Canada are ex-Air Cadets and 67% of commercial and airline pilots in Canada also began their careers as Air Cadets.Some Last Notes Of Mine:I have to admit this Parade was also very hard on me, as I could not climb the stairs well and had my usual chest pains, not to mention being out of breath and my ongoing left arm pain but it was worth it!So I will be handing over being the 538 Squadron Sponsoring Committee Recording Secretary to a more able person. Captain Ricard will be also ending his time as Commanding Officer of 538 and handing over the reins of command of the Squadron to Captain Captain Charlie – Mae Marlatt.This is why he is in so many of my photo shots. Not to mention of course my Granddaughter Sargent Skye Spence, one of my Grandchildren whom I am very “Proud Of” and as with all of my Grandchildren who I Love! I hope you enjoy my photos!Sincerely,Sir Richard akaRichard AbbenbroekRecording Secretary 538 Squadron Sponsoring CommitteeRoyal Canadian Air Cadet 538 Buffalo Squadron
Posted by Sir Richard The Bayo-Hunter at 3:59 PM